Yes, I am unapologetically passionate about Bondo and Sande 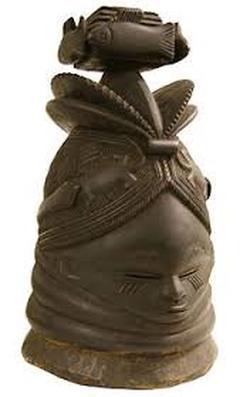 What I want to highlight today speaks specifically to Rev Kabs-Kanu’s preamble to my article (here). In terms of the country’s record in promoting women’s sociopolitical empowerment, we will leave this for another day and another blog. But I can respond to the good Reverend’s remarks about Bondo/Sande and female circumcision in Sierra Leone today.

1. Yes, Kabs-Kanu, I am obsessed with Bondo/Sande, if this means that I am passionate and relentless in protecting the honor and dignity of my mother, aunts, grandmother and the majority of silenced women and girls in Sierra Leone who are Bondo/Sande then I accept this label with great pride. I have made a lot of personal and professional sacrifices to stand up for over two decades for what I believe is right. I have no qualms with being obsessed with countering the dangerous myths that are being uncritically recirculated surrounding female circumcision. I make no apologies for using my education, experience and knowledge to demand equal treatment and equal rights of Bondo/Sande women with the rest of adult women and men in the world. I will continue to insist on open access to and public debate of the medical evidence of the supposed differences between circumcised and uncircumcised women in terms of our long term reproductive and gynecological health and sexuality. Sorry, the usual sensationalist and bigoted propaganda is no longer going to fool the women of Sierra Leone.

2. With regard to one of those myths, I can address this right now — the ludicrous idea that female circumcision is “dying” or “waning” in Sierra Leone, as Kabs Kanu states. The UNICEF 2013 Report on FGM/C identifies Sierra Leone as one of the highest prevalence countries with 88 per cent of girls and women ages 15-49 circumcised. Of this number, only 26 percent want to see the practice end. The UNICEF report states clearly that even the 26% figure could be inflated because of the expectations respondents have of what their “correct” response should be. What this basically means is that most circumcised women, just like most circumcised men, support their genital modifications.

3. Sierra Leone is no Nigeria. Nigeria has a relatively smaller minority of women who practice female circumcision and the outgoing President Goodluck Jonathan used the distraction of his last few weeks in power to push through and sign a bill to ban the practice. He had nothing to lose and a lot of goodwill to gain from western countries. In Sierra Leone, the vast majority of women in the country are circumcised and support female circumcision and form the largest voting bloc in the country. So Kabs-Kanu, remember that as you continue to allow the publication of dehumanising images of a traditional women’s institution that is of immense value to the bulk of women in our society.

4. As someone who has worked extensively on CEDAW as a consultant for UNICEF in The Gambia, I am very much familiar with its provisions as well as the behind the scenes politics that goes into forcing the hands of aid-dependent countries like Sierra Leone into compliance with those protocols that are not in the interest of the majority of women on the ground. In Sierra Leone, we will have this open debate on the international protocols that the GoSL has signed on to concerning the bodies of the vast majority of women in the country without their knowledge or participation in any of these formal and back door deliberations. We will have open and free discussions on human rights, the various conventions and whether specific special protocols promote the rights of all women to equality, non-discrimination and to self-determination with respect to female circumcision.

5. The good Reverend is certainly right that there are some women and girls who have had negative experiences, perhaps even horrific experiences in the Bondo “bush”. I am sure there are many men and boys with their own horror stories and fears of male initiation. Shall we call an end to male circumcision as well? I do believe that these self-styled “mutilated” women have rights and these rights ought to be protected by the GoSL. However, there are ways we can work together to advance solutions without using degrading language to insult the private parts of our mothers and grandmothers or to disparage an aspect of our culture that is still very meaningful for the vast majority of women and girls.

Further, I do think it is very relevant what western or white women do – since they are the ones with the power, money and resources to influence what happens to our African bodies in our own countries. Their own women and preadolescent girls are rushing in numbers to acquire the same genital surgeries that they condemn us for and yet we don’t see their disembodied faces on western magazine covers or the decontextualized pictures of bloody surgical tools held by some faceless and bodyless white hand. But Cocorioko newspaper has no compunction in portraying and disrespecting “our precious” Sierra Leonean women’s bodies in this way.

Of course, there is more to life than Bondo – this is a silly truism. But for the majority of women in Sierra Leone, Bondo remains a very meaningful part of daily life. Female circumcision has existed for thousands of years, has pre-existed male circumcision and all the Abrahamic religions as well as western civilization. Bondo and Sande have predated the very western feminist organizations that want to destroy these African female institutions of power. The practice will not end in our lifetime and we need to stop giving anti-FGM activists all the money they want simply to tell the world that they can end it – that they got this. The only thing that will come to an abrupt end is the heyday that many western feminists and some African women themselves have enjoyed in reproducing these ridiculous FGM meta-narratives about the sexual subjugation of circumcised African women.

This was first published on Dr Fuambai Sia Ahmadu’s Blog