Is Zero Tolerance the best approach for ending FGM? 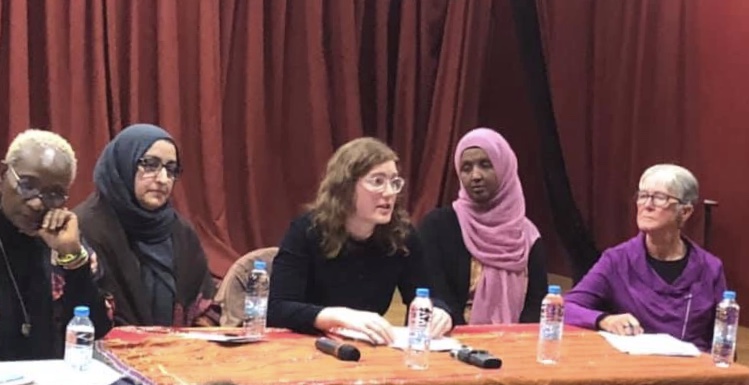 On Saturday, 8 February 2020, the recently formed group, Hidden Voices UK, hosted a theatrical performance about FGM called “Judging without Knowing” in Bethnal Green, East London, followed by a panel and open discussion with over 70 people who attended. It was organised in partnership with Women’s Inclusive Team, TALO, Queen of Sheba International, and Acta Community Theatre Bristol.

The event was one of a number of responses to the 17th anniversary of the UN’s 6 February International Day of Zero Tolerance for Female Genital Mutilation (FGM), and a ground-breaking one.

The members of Hidden Voices are increasingly concerned about how the criminalisation of FGM (also referred to as female genital cutting or FGC) is negatively affecting African communities living in the UK, particularly women and girls from Somali communities. Hidden Voices say that instead of being able to focus on whether any cases of FGM are even taking place in the UK, their group is having to focus on unethical and unnecessary referrals for child protection and helping innocent women to get back their children, who have been taken into care. They say: “The massive increase in referrals has put all on a hopeless path, and we have decided we must go public and expose this injustice.” Hence this play and public event.

The play was created entirely by Somali women working with actors from Acta Community Theatre, Bristol. It highlights the damage caused by a now common narrative that surrounds FGM in the UK – a combination of victimhood, stigma and criminalisation. The performance puts mothers and daughters at the heart of the issue and shows how women who were “victims of FGM” (mothers who were cut as children, almost all in Somalia in the last century) are now being pre-emptively criminalised by the assumption that they will have their daughters or granddaughters cut too.

Through the real-life stories of two women, one with a young daughter and one with a newborn daughter, the play depicts the impact that so-called safeguarding policies have on families who are accused of carrying out this practice without any concrete evidence that they are planning to do so, and who are not believed when they insist they have no intention of doing so. What becomes clear is that the women are suspected of intending to carry out this crime only because of their racial, ethnic and cultural background and their own history of FGM as children. This “suspicion” is a form of racial profiling. It is unethical and discriminatory and should be rejected.

The play was followed by a panel, chaired by author and journalist Ella Whelan, which included:

– Bríd Hehir, researcher and author of the blog Shifting Sands,

– Yasmin Aslam, senior project officer at Ashiana in Sheffield who works with ethnic minority and refugee communities who have been affected by violence and abuse, and

Many crucial issues were addressed. These are the ones I focused on:

1. What does “Zero Tolerance” mean in practice as opposed to being a slogan? What is the relationship between this and the assumption that everyone is guilty unless proven innocent, and that an assumption of guilt means it’s OK to take children into care without concrete evidence that they are at risk – that is, on the basis of “just in case”? Let alone to claim, as one person did in the meeting, that sometimes we just have to accept a few injustices to avoid children being hurt. This implies it is OK to hurt some children to protect others? Surely not.

2. When and why did the designation by the World Health Organization of FGM/C as a “harmful traditional practice” change to it being described as “child abuse”? FGM/C traditionally had, and still has, a cultural value in many African communities as a rite of passage from childhood into womanhood and readiness to be married. There were and still are many social penalties for refusing to circumcise girls, just as there are for not circumcising boys. At the same time, because of 40 years of campaigning against FGM/C, the practice has been declining globally, which is rarely acknowledged.  In 2013, UNICEF first published data to prove this, and to show that the more severe forms of FGM have also become less severe (and medicalised) in many places through concern to protect the child from harm but still be able to fulfil social requirements.

Here are some legally recognised definitions of child abuse:

– According to the CPS it includes physical, emotional and sexual criminal offences, as well as neglect, of a child.

– Citizens’ Advice; Harm to a child means ill-treatment or damage to their health or development, including the on-going failure to meet a child’s basic physical needs or psychological needs, or both; not providing adequate food, clothing and shelter; making inadequate childcare arrangements; and failure to protect a child from physical and emotional harm or danger; threat of injury, or an actual physical injury, such as hitting or shaking a child; constant or unjust punishment; withholding affection; telling a child that they are worthless; not giving a child opportunities to express their views; preventing a child from taking part in normal social interaction; letting a child see or hear the ill-treatment of someone else, for example, in a domestic violence situation; serious bullying, including cyber bullying, causing the child to feel frightened or in danger; sexual abuse; domestic abuse.

These definitions are about systematic, ongoing forms of ill-treatment, punishment and injury for its own sake. While everyone agrees that FGM/C is a harmful practice, it is also qualitatively different because it is a traditional ritual, symbolising belonging – the opposite of rejection or punishment.

The fact that male circumcision is not seen as child abuse by the same people who consider female genital cutting a form of abuse raises questions that few wish to confront or answer.

3. I participated in one of the first discussions at WHO about FGM and the terminology describing it. The decision to use the word “mutilation” – as opposed to circumcision – had the effect of adding moral condemnation, completely differentiating it from male circumcision, about which a comparable term might be “male penile mutilation”. I now believe we got it wrong from the start. USAID decided some years later to reject the term FGM and created the term female genital cutting (FGC) to avoid causing offence or distress to those who had had the procedure. Others insist on saying FGM, in that they believe the word “mutilation” is an accurate descriptor of what is done.

In the meeting, we heard that there was another term used by Somali women (Halal) which does not carry a meaning of condemnation, but indicates that it is a traditional practice.

4. There are no accurate data on the prevalence or practice of FGM across the UK. While absence of evidence is not evidence of absence, it is wrong to claim the numbers are “an epidemic” based on deeply flawed NHS Digital data, or total numbers of calls to the National FGM Centre, or on FGM Protection Orders issued, as some very vocal groups do. The “estimates of the numbers of girls at risk” that are being bandied about have not been reached through valid methods. They should not form the basis of any policy whatsoever. Epidemiology is the study of the incidence and distribution of health-related events. There are recognised methods for collecting data; accuracy is critical. It is past due time for proper studies to be carried out, and that means with anonymised methods.

5. Lastly, is criminalisation the best or most effective way to prevent and stop FGM? Although this has been an important topic of debate and discussion internationally, and is ongoing, it rarely occurs in Britain. Yet internationally there is an increasing level of questioning by human rights advocates of the value of imposing criminal sanctions as a way of protecting human rights – across the board, which can be applied with FGM. This has also been raised in relation to punishing sexual transmission of HIV, carrying condoms, using contraception, having an abortion, and buying and selling sex.

Few people have been prosecuted for FGM/C in any country, no matter what the prevalence of the practice. In the belief that prosecution has failed in the UK, the reasons for which deserves closer examination and explanation, a growing number of people who are still in pursuit of punitive measures, are calling for safeguarding of children. This includes taking children into care based on their mother’s historical FGM/C. This is punishment based on an assumption of guilt without a crime. It is a violation of justice and rights, and it is disingenuous to pretend otherwise.

6. There is much more to say. For example, this meeting didn’t even touch on the role of accusations of witchcraft that greatly influenced the decisions to convict in both the London trial in early 2019 and the Dublin trial at the end of 2019. Links to witchcraft must be rejected and excluded from prosecution. They are misogynistic, racist and obscene.

But the most important thing that happened in the Bethnal Green meeting was that nearly every African woman who spoke talked about being made to feel like criminals, about being stigmatised, blamed, treated with suspicion, and disbelieved. They insisted that FGM was simply not happening in their communities in the UK, as they have given up the practice. They asked why the Somali community was being targeted in particular, but no one knew the answer. They said their children were being traumatised by being singled out, questioned, and even having their genitals examined for signs of FGM. That children are being removed from their families and cannot understand why. The damage being inflicted on them and on their families is unconscionable, especially coming from people who claim they are the only ones who think protecting children is important.

This was a powerful, positive event.

This was first published on The Berer Blog 10 February 2020 and is reproduced here with permission.