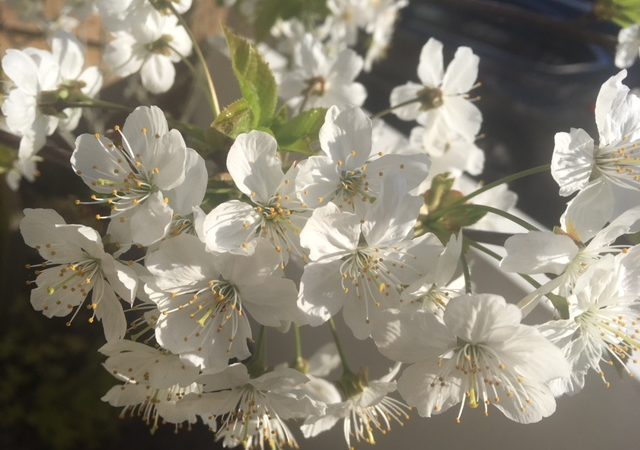 The ‘Bristol Model’ for tackling FGM which focuses on community engagement and empowerment, strong partnership working and developing the right services and resources to tackle ‘FGM’ at a local level is lauded by some. But it did not involve the Somali community in Bristol despite that they make up the single largest migrant group in that city. Nor does it meet their approval.

Reverberations from the high profile ‘FGM’ trial held in Bristol, UK, in February 2018 are still being felt throughout the city and county. A father of Somali origin was accused of an FGM-related child cruelty offence. Judge Julian Lambert described elements of the court case against the man, as “deeply troubling” and called the account of the key witness, an anti-FGM activist, “inconsistent”. The Judge had found the evidence “wholly inconclusive at the highest” and instructed the jury to return a non-guilty verdict.

A police spokeswoman said afterwards that the force accepted the court’s findings but insisted, despite evidence to the contrary, that “FGM remains a deeply entrenched practice and we know these harmful procedures are happening in this country right now”. More recently the Police Commissioner asserted it was even happening within the boundaries of Avon and Somerset.

The Bristol Somali Media Group while acknowledging that FGM is an illegal practice that should be eradicated, suggested it didn’t give activists and charities the right to waste public money and destroy the lives of innocent families in the process.

The Somali Community in Bristol whilst relieved at the court verdict, were upset and formed the ‘Somali Parents Against Stigmatisation Group‘. Members said the anti-FGM campaign in Bristol “is based on assumptions, misinformation and intimidation” which “targets and profiles certain ethnic groups”.

The Group is also critical of Bristol’s much publicised FGM partnership model, suggesting it is detrimental to the welfare and safeguarding of young girls, and that the work of law reinforcement officers should take an ‘evidence-based’ approach.

The objectivity of Detective Inspector Pook, a trustee of the anti-FGM charity, Integrate UK, where the key witness worked and who has known him personally for several years, has also been questioned by Ian Liddell-Grainger, MP for Bridgwater and West Somerset. He thought that DCI Pook’s and Mr Ullah’s relationship in the case a total conflict of interest, saying “This shows there are major issues at Avon and Somerset Police – the force is losing credibility with the public it’s there to serve.”

The criticisms appear to have hit a raw nerve and five agencies responded to ‘concerns raised about FGM’. They are  reproduced below:

“In recent weeks we have heard from a wide range of community members on their experiences of the current operational practice in this area of safeguarding. We have welcomed the challenge made by some groups as to whether our partnership approaches have been proportionate in delivering our shared commitment to children being safeguarded from FGM.

“In all areas of safeguarding it is important for us as a Board to review whether our statutory response to concerns are effective in keeping children safe from harm, and we have been working together closely over the last year to review how we work with families from FGM-affected communities. Professional practice in areas of safeguarding are always developing and improving to ensure that the best outcomes are achieved for children.

“We have heard the concerns shared at community meetings and some of these reflect our own identified areas for development in this important area of work. The BSCB is committed to working together to make these improvements. We are currently developing our FGM risk assessment tools to ensure that professionals are able to make more accurate assessments so that our collaborative safeguarding efforts are focused on the children who need it most. Furthermore we are reviewing the use of written agreements and organisations have committed to moving away from this approach not just in respect of FGM but other areas of safeguarding delivery.

“Whilst there will inevitably be some children in our city who we must take proactive steps to safeguard from FGM, our priority is and must continue to be, awareness raising and education. As a partnership we will continue to strive towards this goal and we look forward to our continued collaboration with communities and groups who provide such important feedback, support andchallenge. Safeguarding is everybody’s business. We welcome the positive engagement of our communities in Bristol on this matter and see it as evidence of the Bristol public’s commitment to child safety. We are proud of our diverse city and when we work together on issues of concerns we will ensure that we achieve the best outcomes.”

Avon and Somerset Police and Crime Commissioner Sue Mountstevens said: “Members of the local Somali community will understandably be concerned by the experiences shared at the recent Somali Parents against Stigmatisation community meeting.

“I am fully aware of local people’s feelings within the community towards the police and social care, particularly regarding female genital mutilation. These feelings were reiterated to me when I recently met with members of the Bristol Somali Forum at one of my local public drop-ins following the Bristol trial.

“It’s important our local communities have trust and confidence in the people who are there to help them when they need it. Any response from the police or social care should be proportionate and free from judgment or prejudice. However, it is only right the police and our partners take any reports of FGM seriously, as they would any form of child abuse.

“There is some fantastic work taking place across Bristol to tackle FGM and I am very supportive of this. We know FGM is happening across Avon and Somerset but let’s be clear, FGM is and must not be aligned to a particular community. We all have the welfare of our young people at heart and I hope together we can change perceptions and tackle this crime.

“As the national Police and Crime Commissioner representative for honour-based abuse, forced marriage and FGM, I am committed to protecting the most vulnerable from harm. Working with the police, partners, and affected communities to challenge the practice of FGM where it is happeningand be very clear, that it is child abuse and against the law.”

Jacqui Jensen, Executive Director of Adults, Children and Education for Bristol City Council said: “Safeguarding the health and wellbeing of children and families is an important priority for our social workers and the Council. We have worked for many years to develop policy and practice to keep children from harm and we understand that despite our best intentions the actions we take will not always be popular. This is why we work with our partner agencies and the Bristol Safeguarding Children Board to constantly evolve those practices and policies to meet the needs of children, families and communities.

“Following recent meetings with communities affected by FGM we have listened to the feedback received and the concerns raised by community representatives. As a result of these discussions we are updating the guidance given to social workers to ensure that where proactive action is required, their engagement with children and families about FGM is a sensitive and positive one.

“Education and awareness of FGM remains a priority and we continue to welcome the positive relationships we have with communities as we work in partnership to end FGM in Bristol.”

Superintendent Andy Bennett said: “We are proud to have played a key role in the response both locally and nationally to raise awareness of, and to prevent, FGM.

“This work has been undertaken in collaboration with statutory agencies and affected communities and this partnership approach has been a critical factor in achieving the progress that has been made. We place great value in the strong relationships that have been built in tackling this issue together.

“Along with our partners we recognise the need to constantly examine and develop our professional practice. During the past twelve months we have worked with other statutory agencies and community representatives to refine our approaches and ensure that the response is proportionate to the level of risk identified. We have listened to the concerns expressed recently and will continue to seek the engagement and views of communities in improving our response.

“The safeguarding of children will remain our priority and we look forward to continuing to work together with partner agencies and all FGM affected communities in preventing FGM and securingthe best outcomes for children.”

Bristol’s Somali Parents Against Stigmatisation group expect to consider these response at their meeting on Tuesday 8 May.

PS. They have issued this statement in response to the agencies’. 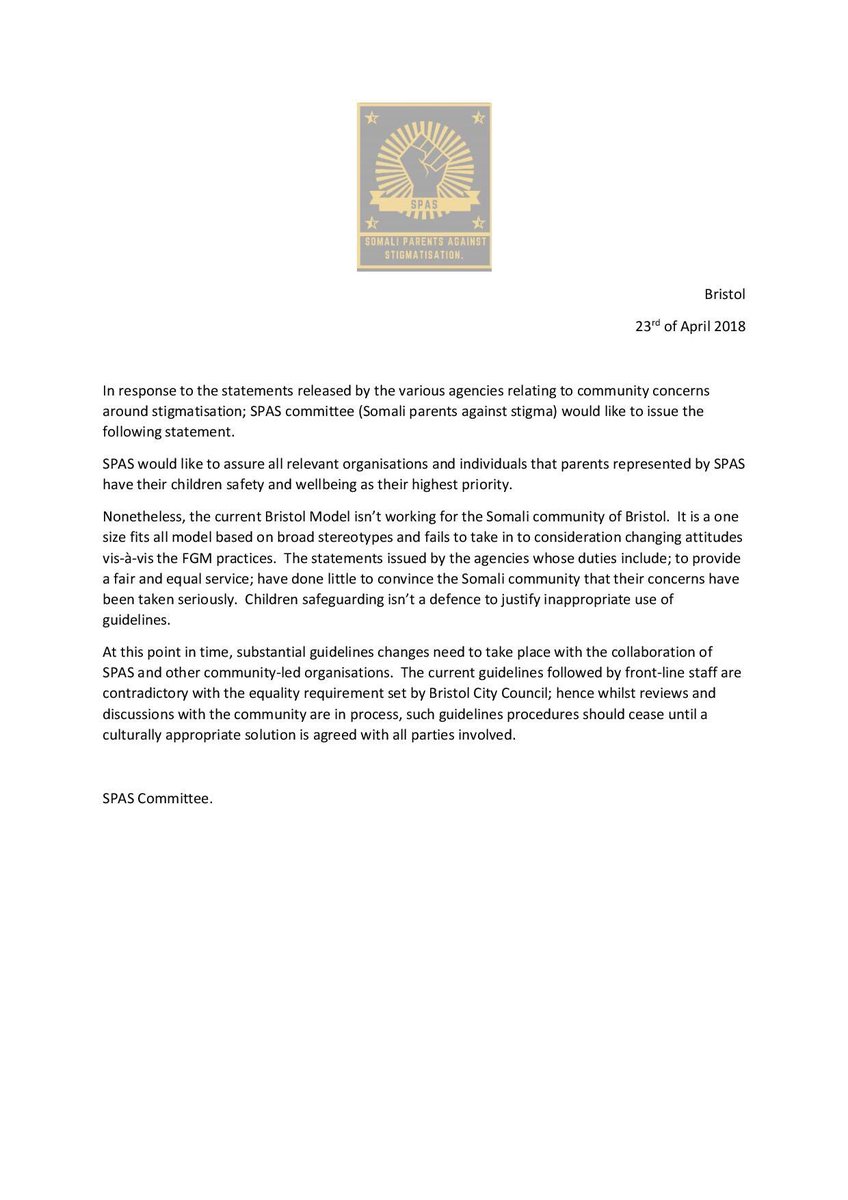