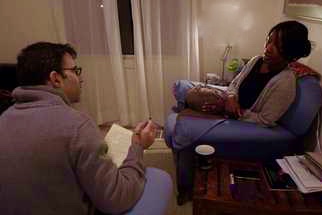 It’s about the anthropology of morality on Sierra Leonean-American scholar and activist, Fuambai Ahmadu, and her life. She is (in)famous in the ‘FGM world’ for having willingly undergone initiation as a 22 year old into the powerful, secret, female, Sierra Leonean Bondo society, including being cut (WHO Type 2 FGM).

Ahmadu is vocal and proud of her initiated status and has bravely challenged the dominant sociocultural norms for some time. Consequently, she has become a thorn in the flesh of anti-FGM campaigners, bucking the almost universal, condemnation of the practice. She does this not on cultural relativistic grounds but as a result of her American upbringing and liberal views on the rights of the individual to equality, dignity, and self-determination that are enshrined in the U.S. Constitution and the Declaration of Universal Human Rights.

She explains ‘My current activism in Africa and the United States is based on the principle that all humans are created equal and there is no reason to single out the bodily practices of weaker or marginalized groups as inherently harmful while people in dominant societies uphold identical bodily practices.”

She has been vocal in contesting the (mis)representation of what she terms female genial surgeries (FGS) in Africa by organisations like the WHO, the UN and the media generally, informed mostly by anti-FGM activists. And has participated in challenging discussions about FGM on TV programmes like HARDtalk and Clear Cut and contributed to The Hastings Centre Report: Seven things to know about female genital surgeries in Africa.

Londoño Sulkin’s essay entitled ‘Fuambai’s strength’ is published in HAU: Journal of Ethnographic Theory. It can be read here.

The abstract says: ‘Despite Fuambai Ahmadu’s upbringing in the United States, she accepted at the age of twenty-two her mother’s invitation to return to her Kono people in Sierra Leone to undergo their secretive initiation ritual to transform her into an unambiguously female, marriageable adult and a member of the women’s secret Bondo society. The most dramatic part of the ritual involved having the external part of her clitoris and her labia minora excised by a sowei, a woman in charge of such ceremonies. This ritual, known as Bondo, was the feminine counterpart of the Poro initiation for boys, in which these were circumcised and given instructions on how to be men. Proud of her initiated status, she has struggled over the past two decades to correct and contest Western anti–Female Genital Mutilation (henceforth, anti-FGM) critics’ overwhelming, indignant imaginary of African initiation rituals as torture and mutilation, and of initiated African women as sexual cripples and weak victims of cruel patriarchal traditions. This essay draws a moral portrait of her; in the process, it engages with the anthropological study of moralities and advocates for a liberal pluralism with relativistic entailments.’

In response she says : ‘What Carlos made of my thoughts, claims and experiences is his own self-conscious interpretation – but an interpretation fully informed by hours of conversations on my life and family, my initiation in Sierra Leone, my intimate relationships and sexuality from my multiple and sometimes conflicting perspectives as an American and a Kono woman, a practicing Christian who also values my Muslim heritage and Kono ancestral tradition. When I reread Carlos’ essay after it was published – putting aside the more abstract or theoretical discussions on morality – I can honestly say “he nailed it”.

Her full response, published in the same issue, can be read here.

Ahmadu’s participation in this deeply personal and illuminating exercise must have taken a lot of courage and is welcome. It will hopefully go some way towards challenging the many supposedly indisputable facts about FGM and correct some false criticisms including the all prevalent one – that African women are victims of patriarchy and without agency.